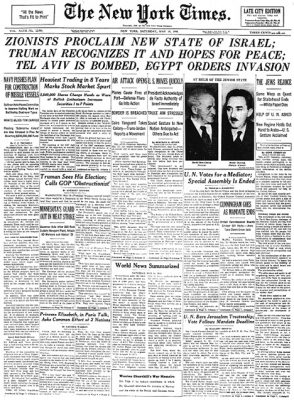 For those who are willing to see, the modern existence of Israel is miraculous.  No other people or nation has ever been expelled from their homeland and scattered to the ends of the earth and then return!

Even before the dispersion, the Apostle Paul prophesied that one day Israel, through Jewish Believers, would be seen as “life from the dead.”

God’s promises to Israel seem so impossible, but with Him, NOTHING is impossible.

Again the word of the Lord came to me, saying, “As for you, son of man, take a stick for yourself and write on it: ‘For Judah and for the children of Israel, his companions.’ Then take another stick and write on it, ‘For Joseph, the stick of Ephraim, and for all the house of Israel, his companions.’  Then join them one to another for yourself into one stick, and they will become one in your hand.

“And when the children of your people speak to you, saying, ‘Will you not show us what you mean by these?’—  say to them, ‘Thus says the Lord God: “Surely I will take the stick of Joseph, which is in the hand of Ephraim, and the tribes of Israel, his companions; and I will join them with it, with the stick of Judah, and make them one stick, and they will be one in My hand.”’  And the sticks on which you write will be in your hand before their eyes.

Some people interpret these two sticks as being Jews and Gentiles.  However God never makes that promise. In fact, in the natural realm, it is important for Jews and Gentiles to maintain their own identity, just as men and women do.  However in the Spirit, we are the One New Man, being nurtured by the root, God.