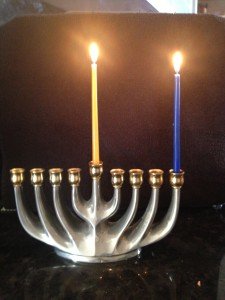 December 28th, the Jewish people (and some Christians) lit the first of the eight candles on the Hanukkah menorah. Actually there are nine candles, but one is always separated in some way.  That “special” candle is called “The Servant” candle.  The Servant candle is lit and then lights all the other candles. So now let’s consider the history of Hanukkah.

We can see great spiritual applications in this tradition:

The history of Hanukkah actually starts in the fourth century with the ending of the Persian Empire and the rise to power of Alexander the Great of Macedon.  Alexander ruled Israel and most of the known world from 336 to 323 BC.

Whereas the Persians had encouraged Jewish religious autonomy, Alexander and those who came after him dominated the world by inflicting their culture upon those they conquered.  This willful spread of the Greek culture is called Hellenization.

When Alexander the Great died, he divided his empire into four smaller kingdoms to be ruled by his four faithful generals.  The two kingdoms which are relevant to the Hanukkah story are the Seleucids of greater Syria and the Ptolemys of Egypt.

For years Israel was the object of wars between these two kingdoms.

For the first hundred years, Israel was under the rule of the Ptolemys and the Jews enjoyed an element of political and religious freedom. The High Priest was both the religious head and the political representative.

But in 198 B.C. the Seleucids defeated the Ptolemys and Israel came under Syrian rule. To prove their loyalty to the crown and advance economically and politically, the conquered people had to adopt and participate in the Greek way of life.

Once again many in Israel forsook the ways of the Lord

…they would not hear, but stiffened their necks, like the necks of their fathers, who did not believe in the Lord their God. And they rejected His statutes and His covenant that He had made with their fathers, and His testimonies which He had testified against them; they followed idols, became idolaters, and went after the nations who were all around them, concerning whom the Lord had charged them that they should not do like them. So they left all the commandments of the Lord their God, made for themselves a molded image and two calves, made a wooden image and worshiped all the host of heaven, and served Baal.

By 175 B.C. the culture of the Jewish people of Israel had been greatly affected by the influx and influence of the nations.

PRAY THAT ALL OF ISRAEL WILL TURN FROM THE CULTURE OF THE WORLD AND WALK IN HOLINESS.