Recognizing Jesus as the Only God

I became a Christian in March 2009 as Jesus showed me the power of the supernatural world.

Before I was involved in every type of esoteric stuff (reiki, channeling,…).

I wasn’t sure if Jesus actually lived and certainly denied His deity. I ignored His claim: “I am the only way to the Father. Only through me you can come to God.” This phrase was against everything in what a esoteric, spiritually open person believes.

This group believes that there is an universal source that creates everything that exists. Everything is energy and god is that energy. Everything comes from that energy and everything goes back to it. But it is an unknown energy with no personal attitude and all religions are good and will lead to this energy (god).

I really wanted to know the truth although I had created such a big picture of my own world view, I was sure that Jesus was not the answer. But that night I learned the truth.

I didn’t know that earlier that day, my Christian friend prayed that this night would be a night of revelation and decision; that all evil powers would be revealed.

That evening we went to a musical about Jesus and his life. But this program showed a different aspect of Jesus’ life – His power over the spiritual world. Actors who played demons went around the audience and whispered in the ears of people speaking lies. They were reminding people what happened to Judas as the demons whispered, “aaahhh yes, take the money, betray Him, tayke the money….”

I was really impressed that Christians knew about angels and demons. Of course I thought that the Christians didn’t understand the whole truth about the spiritual world.

The esoteric believer believes he has power over the spiritual realm of angels and demons.

Once we got home after that musical, the guys asked me, “So Mirco, tell us to which god do you pray, because it cannot be to our God. We pray to Jesus but you do not.

They knew that I prayed to the “universal source…some unknown energy.”

I tried to answer them, but every time I wanted to say, “Come on guys, it’s all the same,” I was unable to speak.

It was like someone or something was holding my throat to avoid prevent me from speaking. I moved my lips and wanted to speak but nothing came out.

For the next 5-6 hours my friends helped me get free by proclaiming the mighty name of Jesus and by worshiping Him.

I recognized that Jesus is sovereign and has all authority over angels, demons and all supernatural and natural powers. The Bible and all the testimonies about Jesus are true.

It was a hard battle, but I surrendered my life to Jesus and went under his protection. Since then my life has so dramatically changed that I thank God for every day and for every blessing. 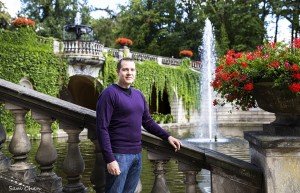